We are very proud that our school gained the accreditation of the International School Award (September 2016) in recognition of our continued efforts and focus on building the international dimension of the curriculum the school community receives.

As a school we know that the world is an ever changing place which in many respects is shrinking and it is vital that as educators we ensure we equip the children with the skills and knowledge to be able to embrace the global community and the opportunities it may present. We believe there is no better way to do this than take part in collaborative learning projects with school communities across the globe.

These partnerships have highlighted that the British Values we promote with the children are simply sound values that school communities across the world also deem important.

Year 3/4 grew spinach and used it to make Spinach soup which they tried!

A visit from Asaph Gheno Were

Foundation led an assembly all about the link with Makonsi Primary School in Uganda. They shared photos of the school, talked about some of the things they have been growing for our Food for Thought Project and taught the rest of the school a song in Swahili. 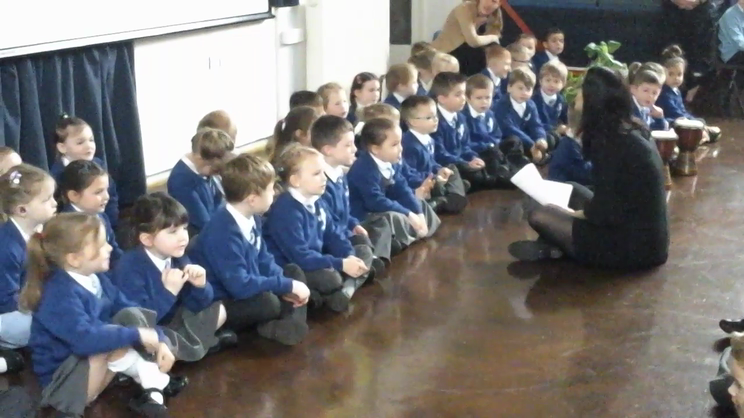 Here is the children in foundation singing a song in Swahili which the rest of the school learnt.

KS1 enjoyed a visit from the Hanban Immersion Programme on Monday. The children were taught the meaning of their names in Chinese and they made chinese masks.

The Foundation children all took part in a session on British values. This session really complemented our entire Foundation Stage curriculum (as it is based on teamwork, developing confidence and a shared attitude towards learning). It also complemented our Philosophy for children sessions which take place weekly.

During the session the children listened to a story called Tom Rabbit and through the characters they talked about sharing, empathy and ownership. The children particularly enjoyed sharing out the sweets in a fair way. Their reasoning was fascinating!

The whole school are very enthusiastic about our link with the Makonzi school in Uganda. The children in Foundation thoroughly enjoyed making a Ugandan mud hut similar to those lived in by some children in Uganda.

The whole school enjoyed taking part in sessions with the Hanban teacher's (teacher's from China). The Foundation children learned all about greetings in Chinese and writing Chinese characters, Year One/Two learned about Chinese opera and dance and Key Stage Two learned about Tai Chi and morning exercise.

The Foundation Stage children take part in a monthly munch session where they try a food type from around the world. They learn to identify the countries on the world map and talk about elements of the cultures found there.

The children particularly enjoyed the sessions on cakes and breads from different countries. Many of the children had not tried any of these before!

European day of languages! The whole school enjoyed celebrating different European countries. We looked at their cultures, their languages, their foods and their location.

The whole school took part in a fund raising event for Charity. All the children took to the playground and walked a Pennycross mile (12 times around the playground). It was lots of fun!

Some classes also looked at the globe and found where Chicago is in comparison to the UK. The foundation children were fascinated to see how big the United States is!

Are we nearly there?!

The children in our Foundation Unit celebrated Christmas across the globe. They learned to say happy Christmas and Santa Claus in a variety of languages......Le Pere Noel (French) Papa Noel (Spanish) Agios Vassilis (Greek). The children found these countries on an interactive map and enjoyed seeing if it was snowing there!